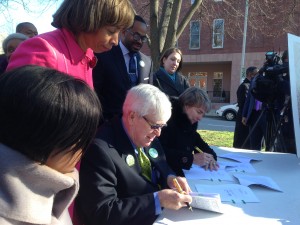 On Monday the State Center Neighborhood Alliance, of which Seton Hill has been a long time member, and State Center LLC signed a Community Benefits Agreement, the first of its kind in Baltimore. This was an amazing and historic day!

As Mayor Stephanie Rawlings-Blake said, “This is what community economic development looks like!”

Thank you so much to all of the community leaders and advocates who have been working for the past 10 years to move this project forward! This has been an enormous undertaking. The last step in the puzzle will be Governor Hogan’s approval.

The event received a lot of news coverage, and our very own resident, Lisa Meyerhardt, was quoted in the BBJ – see below.

“Community groups would be happy to see action, said Lisa Meyerhardt, a member of the Seton Hill Association. Current development plans began years ago under Gov. Robert Ehrlich administration, she said. Current Gov. Larry Hogan can close the deal, she said.
“All we’re waiting on at this point is for the governor to push forward,” Meyerhardt said. “We’ve done our part. The community and our developer have worked really hard together for ten years now.” “

And, if you have some time and want to watch the full event, you can watch it on Charm TV here.

For background on this event, see this press release.

Thank you again for all of your support! 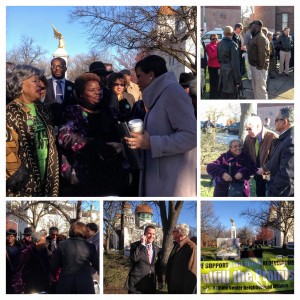