If you are interested in the full election results, you can find them on the State Board of Election’s webpage. 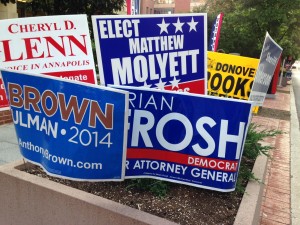 Tomorrow is Election Day for the MD Primaries!  All reporting thus far is showing that the race for Governor is going to be a tight one, as is the race for Attorney General.  Make sure you get out there and vote your concerns.  In these kinds of elections, the winner is often decided in the Primaries, not the General Election, so it’s important to vote tomorrow.

The MD Board of Elections Page has information about the candidates, the districts, ballot information, and more.

Additionally, we have developed our own MD Election Page for your use.

In case you have missed the local news, Baltimore is getting ready for local elections.  Election Day is on 24 June 2014, and polls will be open from 7am to 8pm.  However, if you think you might not be able to make it that day, then you should check out the information on Early Voting, which begins tomorrow, 12 June 2014 and remains open until 19 June 2014.

Your local polling station is located here, and is open from 10am to 8pm.  Full address is:

Want more information about the candidates and the election in general?  Go to this site: http://www.elections.state.md.us/elections/2014/primary_candidates/index.html.

Check out our Election Page for more information on the upcoming elections.